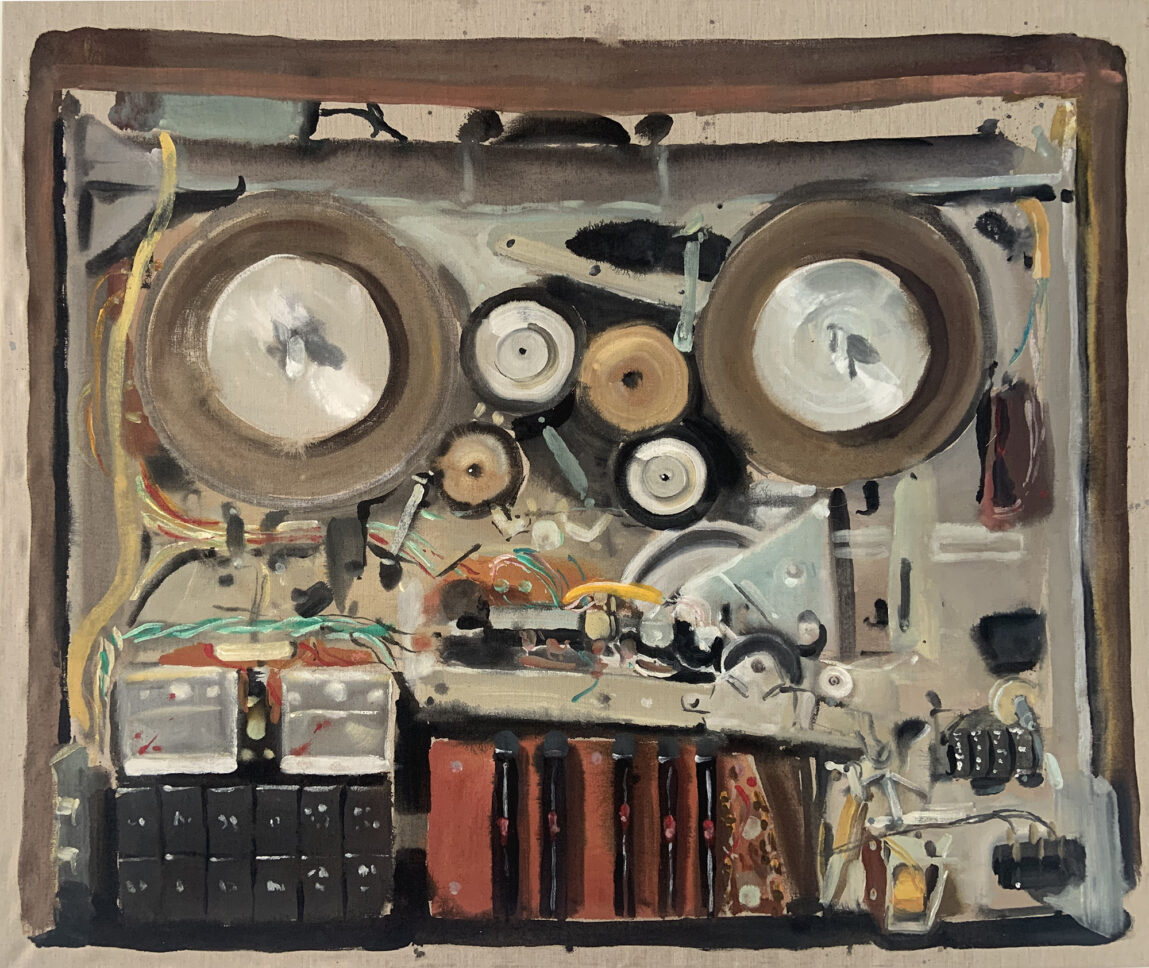 Chapter In your series »Nudes« you disassemble electronic devices from Bang & Olufsen and paint their inner workings. Where does your fascination for the brand’s products come from and what makes them so special for you?

Innokentiy Faatev I started my B&O journey when I got married and moved to a new studio where I wanted to build up a new audio system since music was as much an essential part of my life as art. I looked for a well-sounding audio system, so I started to research online and came up with an affordable vintage Beomaster 4000. I was attracted to the design and the combination of wood and metal and there it started. Then I found a Beolab 5000 amplifier, a great amp! I still have it in my studio. Any vintage equipment had to be looked after, checked electronically and be given some attention, so I started to investigate how to fix things.

Alongside this, I read some books about basic electronics to educate myself on this matter. Then I discovered BeoWorld, a worldwide forum for B&O enthusiasts. There I got lots of help troubleshooting from other experienced members. Usually, in order to do things properly, it takes a lot of patience and time to repair B&O equipment. So thatʼs maybe one of the aspects that I was attracted to, the difficulty of the task, the challenge. The way all the B&O equipment is built fascinates me; the level of craftsmanship and external and internal design. It seemed as if it was something from another world compared to the Japanese gear from the 70s you could find on the second-hand market. Danish craftsmanship was something else, it was beautiful to look at and to work with. Later on, I discovered that itʼs okay to have more than one B&O turntable or amplifier. 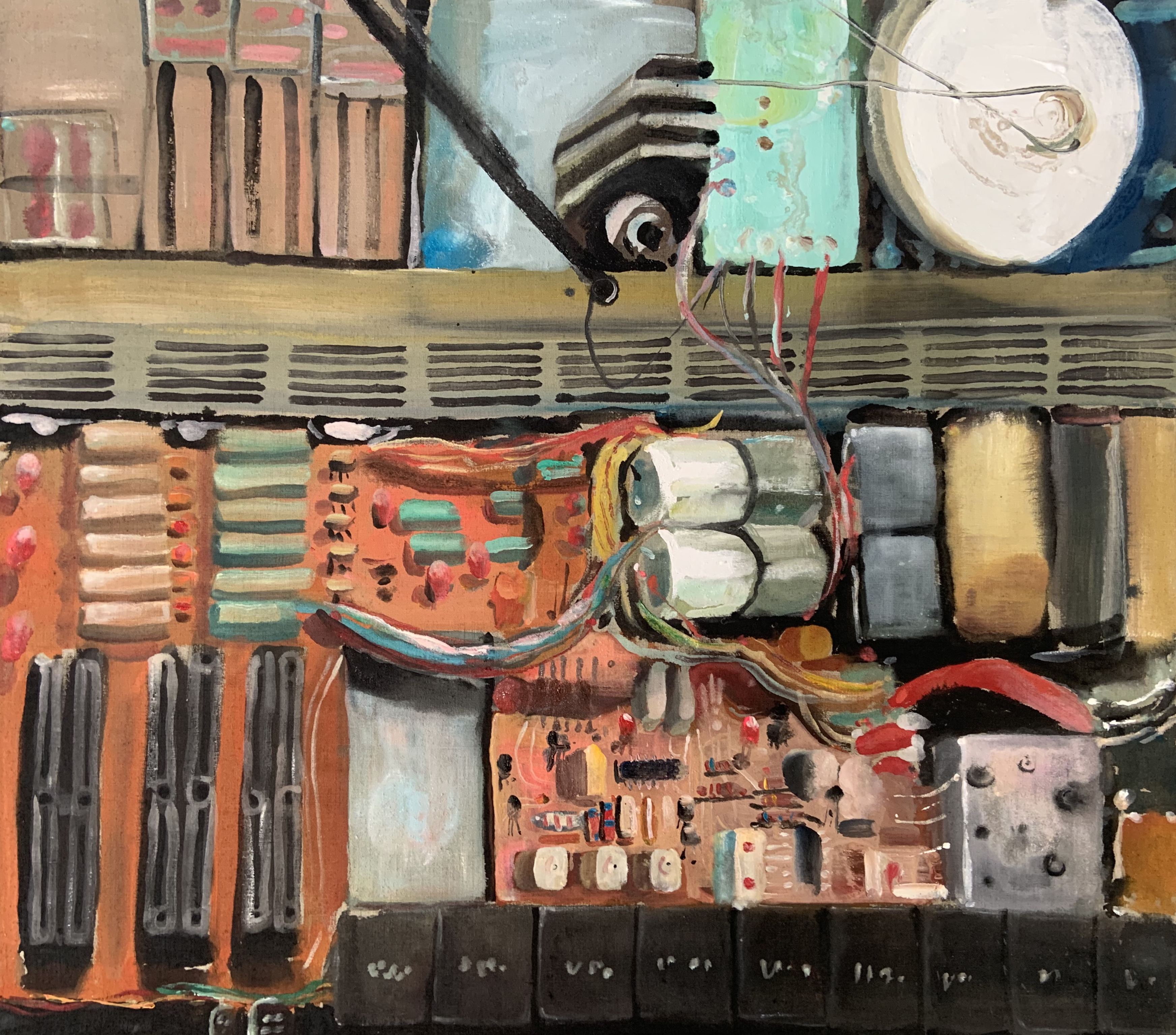 Chapter What prices can vintage B&O equipment achieve today? Are the devices considered rarities on the market or just seen as second-hand gadgets?

Innokentiy Faatev Prices can vary on the second-hand market depending on the condition and aesthetics. Some linear tracking turntables can go up to thousands of euros if they are in excellent working condition. But with a B&O it is tricky because they produce sophisticated electronics and if something is wrong, it is pretty expensive to fix, not every tech can do it. I donʼt keep everything I buy, at some point, I just let go. I sold a good part of my collection to make space and to keep the passion going by investing in some other B&O repairs/art projects.

Chapter Where do you usually find the devices you paint? Do you go specifically in search of certain objects or does chance also play a part in this process?

Innokentiy Faatev Well, of course, second-hand online markets. I usually donʼt look for specific models but it happened once. I wanted to have this reel-to-reel Beocord 1200 because it looked cool, so I got it, it was broken. I fixed it and then I used it as model for the »Nude« series. I still have it. I donʼt use it, I just like the looks of it. Mostly itʼs just a matter of luck, my interest is in audio systems from 70s to the 80s, primarily non-working units that need some attention, things like spare parts are also helpful for future repairs.

Chapter You depict detailed, accurate systems with a generous brushstroke. In some paintings, the colors run into each other and give the image an almost abstract character. How can we interpret this contradiction?

Innokentiy Faatev My idea is to make paintings that reveal the life and the currents that flow inside the machines and are not just representations of an object as it is. I like to think of things that I paint, no matter what, that they are alive, like creatures or some sort of breathing organisms. The idea is to represent something that has a life within, rather than something static. The whole process of painting is quick and energetic. I like to use raw canvas, so the color behaves unpredictably, to emphasize the energy flow.

Chapter Record players, music cassettes… There is a certain nostalgia inherent in some of your paintings. How do you perceive the rapid development of technology?

Innokentiy Faatev Nostalgic, yes, maybe, but also painting, as a medium, is not a new technology. I grew up with tapes and CDs – everything is liquid now. The quality of liquid music is far better than any other »obsolete« format, but still, there is a place for tapes or records. Itʼs a matter of choosing a format, the more there is, the better. I sold many items from my B&O collection to young people, compact audio systems mostly, from the 80s, with a turntable and tape. So I think there is an interest in stylish vintage equipment among young people. 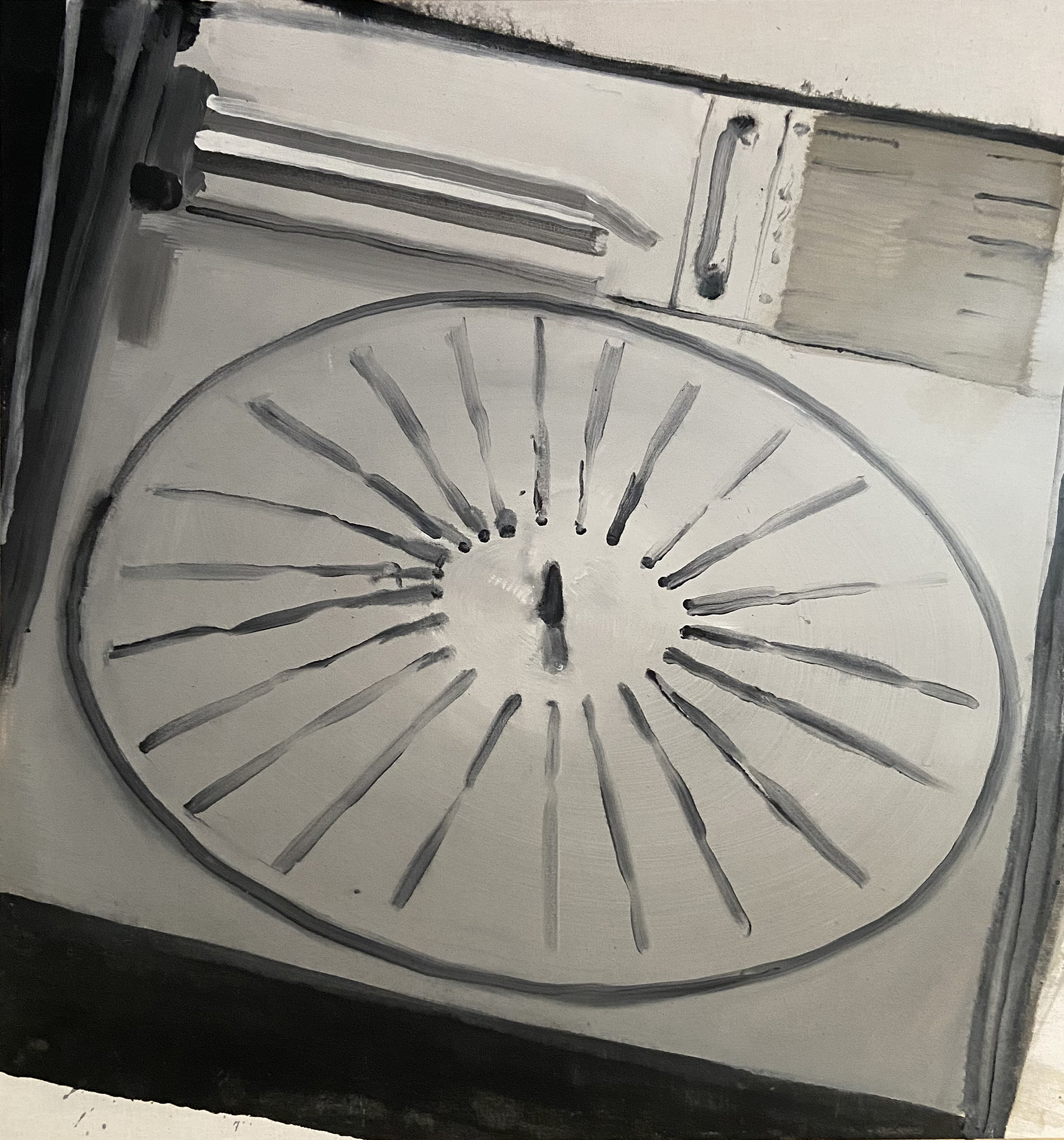 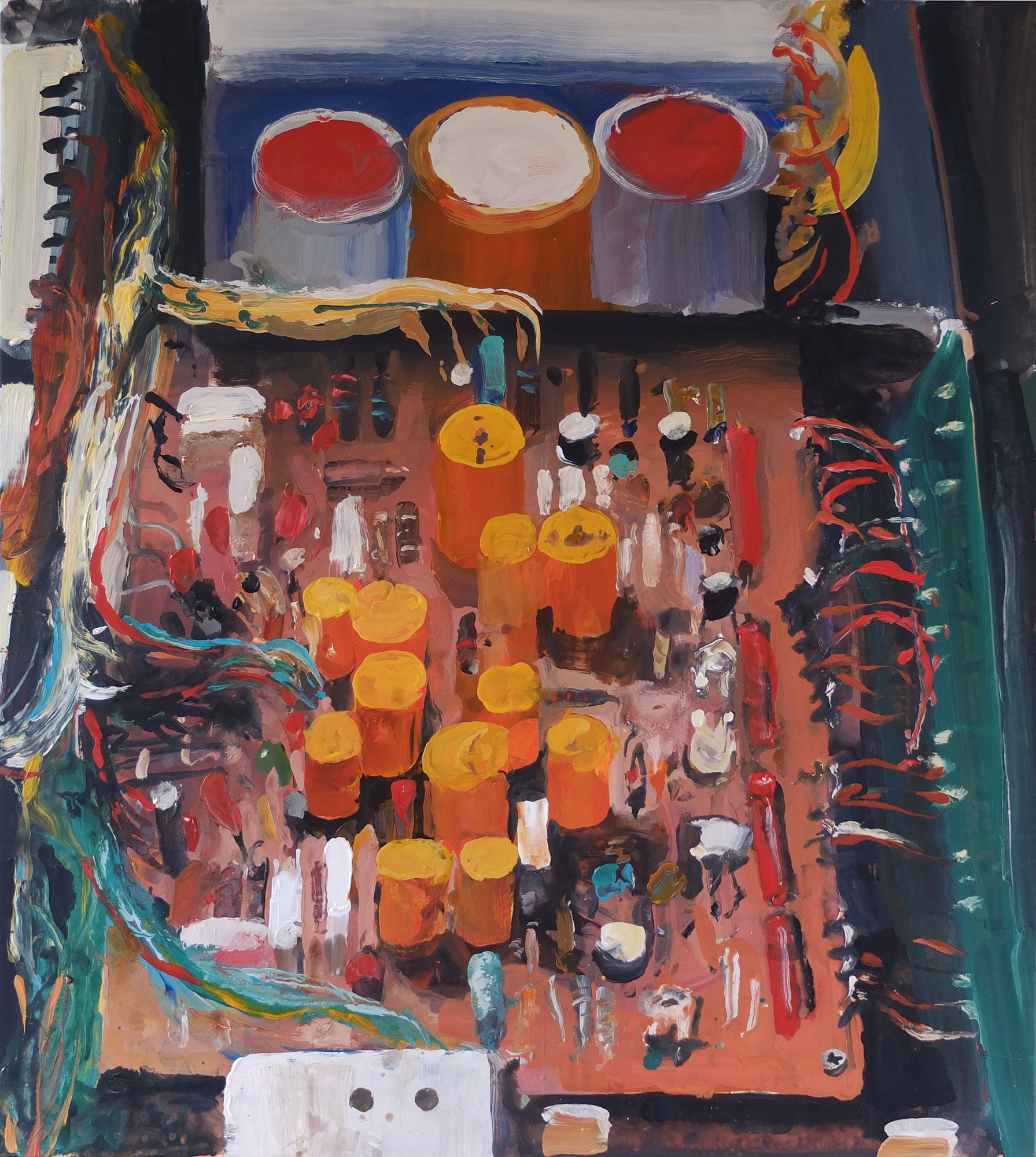 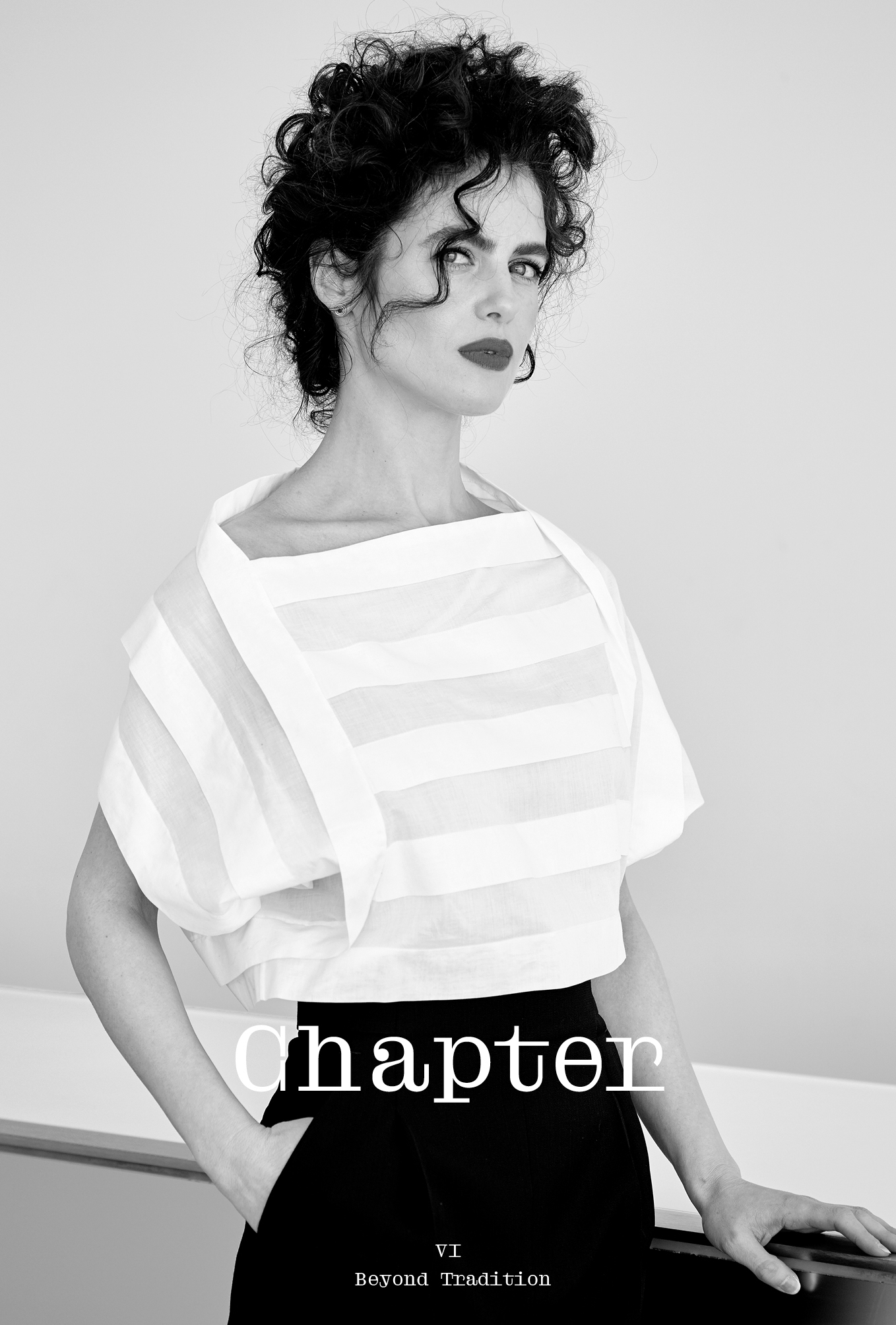